Steady Loads and a Stable Income 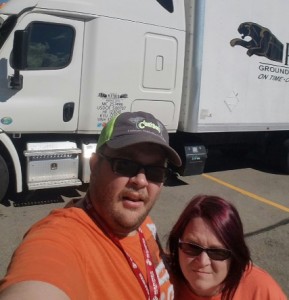 There are times in life when the road ahead is uncertain and circumstances beyond your control converge to steer your career and your income into a ditch. And that’s just where Cody Settles and his wife Brandi found themselves during the Blue Bell ice cream recall of 2015.
“I worked for Blue Bell as a driver when the big product recall hit,” said Cody. “The company was in trouble and we were forced to pick up millions of units of ice cream from stores. No one really knew where the whole thing was going. We just knew that it wasn’t going to be good!”

As a result, Cody found himself between the proverbial rock and a hard place. “Things got so bad, my territorial manager even went out and bought his own truck, and began driving for Panther Expedited Services as a hedge against losing his job; which eventually did happen. And as it turned out, I was the only driver in my territory to get laid off. He kept telling me he thought Blue Bell would hire me back, but I knew in my heart, I had to move on and find something else. That’s when my ex-manager told me his new truck was working out well and Expediting was where I needed to be. Right away, Brandi went to get her CDL and we soon made a call that would start us out on the road to Expediting success.”

Cody didn’t know it at the time, but he and Brandi’s life was about to change for the positive with one phone call to Expediter Services. “Since my manager had such good luck with Panther, I contacted them and explained my situation and future goals. Based on my current needs and future plans (possible truck ownership), they referred me straight away to Expediter Services — that was in March of this year. The first person I spoke to was Kim Smith. She was extremely helpful and got us into a 2014 Cascadia from ES’s fleet — and let me tell you, this truck is nice! We then went through Panther’s orientation and hit the road.”

“Since we started at Expediter Services, signed on with Panther as our carrier, we’re doing very well. The loads are steady, helping us generate a good and stable income,” said Cody. “We’re staying really busy and it motivates us to stay on the road as much as we can. We love it! The amount of support we get from the people at ES is extremely helpful, too. When we have questions, Bobby Gardner is just a phone call away. When you’re new to the Expediting business, it’s great to have someone to answer questions and help you no matter what. I would also like to give a shout out to Sue Robinson and Debbie Acker in back office support who make sure our settlements are always on-time and accurate. When ES says you Never Stand Alone, they really mean it.”
When asked about their plans for the future, Cody and Brandi both agreed that they are in a good place. “Maybe at some point we’ll buy our own truck. But right now, we’re really enjoying where we are right now. We’re grateful for the opportunity to be able to make a good living doing what we love, and Expediter Services plays a big part in our success.”