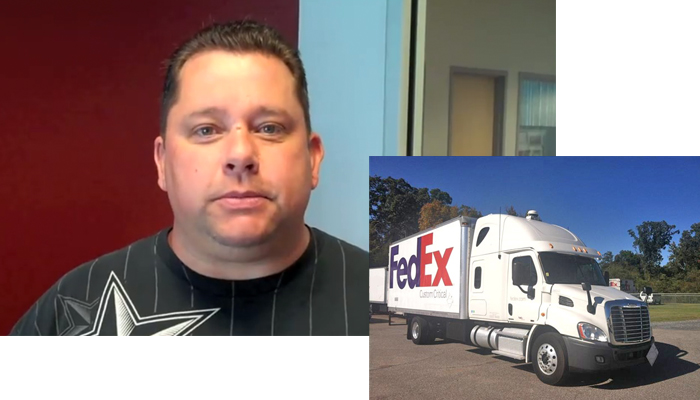 Jimmy Moore and his new Cascadia

One of the great things about Spotlight News, is that we get to know Expediters on a long-term and even an intimate basis. We then have the privilege of sharing their stories about what works to make their businesses successful or more importantly, what doesn’t work. Either way, you get to learn from their experience.

Spotlight revisits Jimmy and Bobbi Moore, an Expediting team who have overcome adversity (at least at the beginning of their career) to build a successful fleet of six trucks. (read more about their earlier stories here and here)

The Moore’s Expediting business began back in 2013, signing on with FedEx as their carrier. But little did they know, their business would be off to a bit of rocky start. “Bobbi and I dove into our business with great expectations. We went through FedEx orientation, bought a new Freightliner M2 from a Freightliner dealer and hit the road — and that’s where the trouble began,” said Jimmy. “No sooner had we started hauling freight when the truck began to have problems. If it wasn’t one thing it was another. We knew right away that this truck was a mistake. At only 180,000 miles I had to replace the engine, and recently the transmission “hand grenaded” and we had to fix it. Out of all the trucks in our fleet, it has the least amount of miles on it. To say that we were frustrated and disappointed would be an understatement.”

Thankfully, the Moore’s story gets better with the right equipment. “We knew then and there that we had to get another truck to take up the slack. We did some research and found Expediter Truck Sales. They told us about a used 2008 T660 and we crossed our fingers and bought it because there was so little equipment out in the market place. We were relieved to find out that this truck was a really good buy. It gave us great service and was a great value. In fact, it worked out so well we purchased another one later that year. From that point on we were hooked on the trucks from Expediter Services fleet.”
And with the right equipment, their business began to grow even more. “Once we got the right trucks on the road, we were able to start making the kind of income we always knew we could. In January of 2014, we added a 2013 Cascadia, and let me tell you, that is one great truck! It is spec’d to a great standard and the quality is head and shoulders above anything we’ve experienced. It’s efficient and we’ve not had a single problem since we bought it. Our experience with this truck affirmed that we made the right decision by going with Expediter Truck Sales. And did I mention that we also went with Expediter Equipment Finance? They made everything so easy.”

Up to this point Jimmy and Bobbi now had a fleet of five trucks…then came the spring EGG. “Since we’ve had such great success with the trucks we got from Expediter Truck Sales, we decided to attend the latest EGG at Expediter Services home office in Southaven, Mississippi. And It was NOTHING like I thought it would be. I mean, it was just so personal. We got to know just about everyone we usually talk to over the phone, including April Holland, the Fleet Managers, Jason & Paul Williams and Jeff Tacker. I would sincerely encourage anyone to attend an EGG and get to know the people at Expediter Services. Since we’ve been in business, our dealings with Expediter Services has always been nothing but positive. They have always kept their word and followed through on what they say they are going to do. They are a company that I can plan my family’s future around and that’s truly saying something.”  And by the way, Jimmy and Bobbi added another 2013 Cascadia to their fleet at the Spring EGG, bringing their fleet to six trucks!

“There’s one more thing I’d like to add about planning for the future,” said Moore. “Freight is on an upward trajectory right now and any edge you can get helps you as a fleet owner and FedEx’s introduction of the flat rate environment has had a tremendous impact on my ability to plan for the future by taking the “artwork” out of expediting. The ability to make solid plans for the future based on flat rates takes the guess work out of knowing when to grow my fleet.”