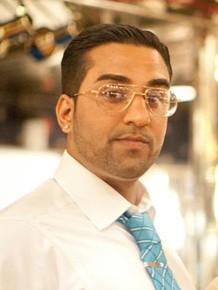 Asif Alidina, the son of East African immigrants from Tanzania, truly understands the American dream and the hard work it takes to bring that dream to fruition.

Growing up in Long Island, New York, Alidina began working for McDonald’s at age fourteen, calling it “his office”. From these humble beginnings, he put himself through college, earning a Bachelor of Science degree in Finance from Stony Brook University in 2007, graduating one year early in order to save a year’s tuition. At 21, before graduating, Alidina had two job offers from finance companies wanting to use his talent. Soon, he found himself on the West coast working in Investment Banking, but due to the Great Recession and the troubled financial markets, Alidina found himself without a job and literally homeless, living in his car and showering at a local gym where he worked out. It was during this difficult time, Alidina had the inspiration and began dreaming of starting his own freight transportation company. “I’ve always been self supportive and at the age of twenty five, I made the decision to go back east, where I gained acceptance to Penn State University’s MBA program. At the same time, I established EXAM Transport & Co., a Tennessee-based biopharma logistics & trucking firm. When I started my business I had exactly $1.12 in my bank account.”

In the two years and three months his company has been in business, he has generated approximately 1.5 million dollars in revenue and is slated to double that in 2015 — with help from Expediter Services. “I’m always looking for new ways to grow my business . By chance, I ran into someone who was an Expediter and we began talking about the trucking business and that’s how I found out about Expediter Services. I started doing research about the industry and went to ES’s website. Soon, I was in touch with Josh Swindoll at Expediter Truck Sales and purchased a slightly used 2012 Cascadia. I also talked with Jeff Tacker and utilized Expediter Equipment Finance for financing. I signed on with one of the carriers supported by ES’s Owner Operator Program and completed orientation just as the holiday season was kicking into high gear. My driving team and I dove in and learned a lot in a short amount of time. We made it through the crunch and we’ve started the year off well. Without a doubt having gone through such an intense holiday season helped me learn a lot and made me an even better Expediter. I feel like I can handle just about anything!”

As with every other aspect of his life, Alidina isn’t resting on his laurels. “I have an aggressive 5-year growth strategy in place for the years 2015-2020. I’ve placed my Masters program at Penn State on hold in order to focus and build EXAM Transport & Co., and I will definitely continue to utilize the programs and services offered by Expediter Services to reach this goal.”

Alidina has accomplished quite a lot at the age of twenty-eight. “I’ve really been blessed. I married the girl of my dreams. We have an amazing two year old son and another baby on the way! America truly is a country that will let you pursue your dreams if you work hard enough.” Check out EXAM Transport & Co.’s Company Profile at Bloomberg.com.