From Semi-retirement to Full-Time Owner Operators 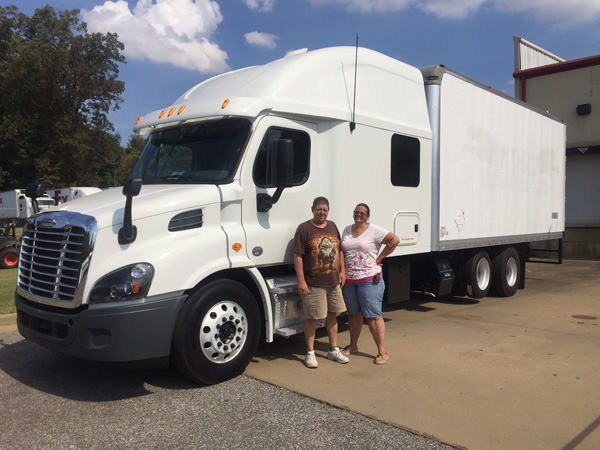 The great thing about Expediting is the opportunities that are available to practically anyone. It doesn’t matter about your age, gender, or even your background. Expediting can help launch a first, second or even third career. This installment of Spotlight News shines the light on Dorr and Anne Tymon, a couple who’ve already had successful careers and love the road, but they weren’t quite ready to drive off into the sunset.
“I was in retail management for thirty years and Dorr was an owner operator back in the eighties driving big rigs. We also owned a successful dry cleaning business and a restaurant. You could say we’ve had our fingers in a  number of different pies over the years. And we’ve always had the desire to work for ourselves one way or the other,” said Anne.

After so many years of working, the Tymons decided it was time to take off and enjoy life, so they took to full-time RV’ing. “Over the last four years, Dorr and I traveled across all forty eight of the lower states. We had a great time because we both love the road so much. But Dorr got the itch to get back to driving commercially and bought a tractor last summer running a reefer. Things were going great, then we met a guy at a campground who owned two Expediting trucks — and things changed!”

Things changed alright as they realized that Expediting would be their new career. “After talking to people who were into Expediting, Dorr contracted the Expediting itch in a big way! He nudged me into getting my commercial license, which I got this past April. Then we began a new career as Expeditors in May, signed on with Panther as our carrier. We drove as Contract Drivers for a few months and found out we really liked it. We were really drawn to the lifestyle and the earning potential and soon decided we wanted to own our own truck.”
Like many folks who decide to become Owner Operators, the Tymon’s began doing research on where to find the best truck for their money. “Once we made the decision to become owners, we began asking around about where to get a truck and our rep at Panther recommended that we contact Expediter Services. So, we made a call. The folks at ES were very helpful and hooked us up with Danny Vernon at Expediter Truck Sales. He found us a very nice slightly used 2013 Cascadia from Expediter Services fleet and we made the trip down to ES’s offices in Southaven, Mississippi to pick it up.”

But this is where their story takes an unexpected turn. ” No sooner had we started looking over the 2013 Cascadia we had picked out, Dorr spotted a 2014 Cascadia with a Bolt Custom sleeper sitting in the parking lot being power washed. It was love at first sight! He decided right then and there this wasthe truck for us. Danny Vernon was more than happy to help us acquire this newer truck. Soon we were in touch with Steve Kochensparger at Expediter Equipment Finance and the deal was done. The whole thing was so easy. Dorr just loves this truck and I love the Custom 100 inch sleeper! We’ve been on the road for just about a week and have made a few runs already. We feel like we got a great deal, especially since this unit is a 2014. “

The Tymon’s are also looking to help their son get into the business. “There’s so much opportunity in Expediting. We’re talking to our son, who is twenty-five about getting his Class B license. We’re wanting to buy another truck from Expediter Truck Sales so he and a friend can earn a good income. The level of support you get from Expediter Services Owner Operator program would be so helpful for someone just starting out. The fuel card alone makes purchasing fuel so easy & efficient. It’s exciting to think about the potential for growth for all of us with help from Expediter Services.”