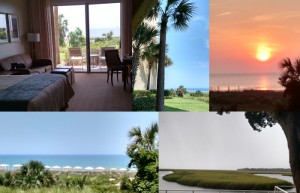 A few weeks ago Spotlight News reported on Kenneth & Virginia Babcock and James Tucker & Elizabeth Johnson, two independent contractor teams who were awarded the coveted FedEx Four Star Award for Excellence. Since that story ran, both teams have since attended the weeklong celebration at Amelia Island, Florida and are now basking in the accolades and afterglow of a four star luxury vacation.
For those who are perhaps unfamiliar with the Four Star Awards, it’s FedEx Custom Critical’s way of acknowledging the top independent contractors in their fleet who demonstrate a high standard of customer service, safety and efficiency. It’s an award that only a small elite number of contractors achieve. And as the two teams describe it, it’s a great honor and a terrific celebration.

Enjoying the Perks and Rewards

“The Four Star Awards were fabulous, FedEx did not disappoint! We had steak and lobster at the awards dinner — again! It was a beautiful atmosphere, we were right on the Atlantic Ocean.There were two get togethers with everyone, then they let us do what we wanted to do. That gave us a lot of time to ourselves, which we enjoyed very much. It was just a wonderful time.”
— Virginia Babcock

“The week was everything we had heard about and more. We enjoyed a couple’s massage. And every morning we had dips in the pool and long walks along the beach. The food was incredible too. On the final night at the award banquet we had filet mignon and lobster tail. Needless to say, we enjoyed every minute. We’re so thrilled to have been chosen to be Four Star recipients.”
— Elizabeth JohnsonExpediter Services is privileged to be represented by two hard working and high achieving teams. Each one deserves the FedEx Four Star Award, as well as the perks that go along with it. They inspire everyone to do their best everyday,” said Jason Williams, President of Expediter Services.