Taking the Path to Fleet Ownership 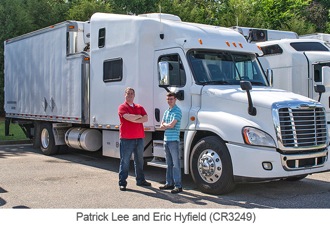 In June of 2013, Spotlight reported how Patrick Lee and Eric Hyfield, two young men from Baton Rouge, Louisiana, turned to Expediting to escape the effects of the “Great Recession” and the limited economic opportunities in their area. Today, they are successful Fleet Owners who know a thing or two about utilizing Expediter Services’ Circle of Success and taking the Path to Ownership. Click here to read story from June of 2013.

Their journey to Fleet Ownership began in November, 2012, entering the Circle of Success as new Contract Drivers. By June of 2013, they bought their own truck through Expediter Equipment Finance, becoming Owner Operators. And just this month, they became new Fleet Owners with the purchase of a refrigerated 2009 Freightliner Cascadia. “Ever since we began in Expediting, Eric and I dreamed of being Fleet owners,” said Lee. “When we got into the business as Contractors with Expediter Services, we jumped into it with both feet; staying out on the road for long stretches of time, taking lots of loads and learning as much as we could. This helped prepare us for the next step of actually buying our own truck. Now, we’ve learned even more and recently purchased a refrigerated truck — our first step to building a fleet.”

It’s interesting to note that Patrick and Eric’s plans to purchase a new truck were already laid as far back as April — then they visited the EGG the weekend of April 4th & 5th, and things changed! “It’s kind of funny, Eric and I had already found a truck to buy and we were getting ready to talk to Expediter Equipment Finance about it. At about that same time, we learned about the EGG at ES’s offices in Southaven, Mississippi. We went their with the sole purpose to just meet the folks at Expediter Services and get to know other Expediters. But when we got there, we saw this Cascadia for sale, and it was such a better truck than the one we had already picked out. We spoke with Steve Kochensparger who was at the EGG and started the ball rolling to purchase the truck. The EGG was so much better than we expected. It was great meeting so many Expediters and talking to them about their experiences as Contractors, Owner Operator and Fleet Owners. I would recommend anyone interested in this business to visit the EGG.”

The future is looking bright for the new Fleet Owners. “Today, we just locked down a team to drive our new truck. Now we can concentrate on working hard so we can expand our fleet in the near future,” said Lee.

Going Far in a Short Amount of Time

Like many folks affected by what has become known as the “Great Recession”, long time friends Patrick Lee and Eric Hyfield were looking for career opportunities. After quite a bit of research online, they realized that Expediting may just give them the leg up they needed to turn their careers and their lives around.

“The state of the economy in general had really made it tough for me to make a living here in Baton Rouge,” said Patrick Lee. “I wanted to find something that could become a career, and not just short term employment. Eric was kind of in the same boat, we both were looking for the right opportunity. I started doing some research online and began looking into Expediting. The more I learned, the more it appealed to me. I really liked that idea that driving an Expediting truck didn’t involve hauling a trailer.”

Their online research eventually lead to Expediter Services’ website. “When Eric found Expediter Services online, I contacted them to see what we would need to do to become Expediters. Their insight into the industry was really helpful. Even at this early stage, Eric and I had it in our minds that we wanted to be Owner Operators — but first, we knew we had to learn the business from the ground up. We got our CDL’s and signed on with Expediter Services as Contract Drivers,” said Patrick.

Indeed, Patrick and Eric’s Expediting education had begun in earnest. “With FedEx as our carrier, we began making runs all across the country. We’ve really learned a lot over the past eight months, and Expediter Services’ support has been extremely helpful all along the way, so much so, that we decided we were ready to take the path to truck ownership,” said Patrick. “We contacted Josh Swindoll at Expediter Truck Sales and soon began the process of buying a truck of our own: a 2008 Kenworth T660! The process went smoothly, we made our downpayment and Expediter Equipment Finance helped us with financing. It couldn’t have gone any smoother.”

Their journey into Expediting and truck ownership took less than a year, but they’ve set some long term goals going forward. “In the near term, we’re going to run our new truck and focus on earning money. We’ve already made a run into Canada, and things are going really well. In the future, we’re thinking of adding another truck or two. There really is no telling how far we can go,” said Patrick.