Trying It Before Buying It Pays Off 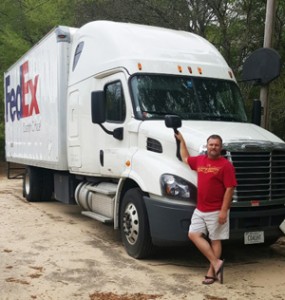 How many times have you had the opportunity to try out an Expediting truck, or even try out the Expediting business before making a commitment? Chances are, you haven’t — unless you’ve taken Expediter Services’ up on their “Try it Before You Buy” It offer. This edition of Spotlight News tells the story of how Terence Paul became a Contract Driver at ES who took the Path to Ownership. As you’ll see, he tried it and he liked it, becoming a new truck owner in the process!
Terence Paul’s driving career stretches as far back as the 1990’s delivering loads on flat beds. And over the past fifteen years, he has driven a Class 8-style truck, making deliveries for the dairy industry. As he explains it, there was just no room for growth or opportunity. “I had been making deliveries of dairy products to schools, hospitals and the like for a number of years. The pay was OK, but I realized that I had reached a dead end when it comes to pay and growth potential.”

Sensing it was time for a change, Paul began looking around for a career with real opportunity. That’s when he found Expediter Services. “I knew I wanted to stay in the trucking industry. So, I began doing research online. I found the Expediter Services website and learned about the many services they offer to both Contractors and Owner Operators. The Path To Ownership really piqued my interest, as I had always wanted to own my own truck. I contacted them to get more information. I learned that the PTO was real and that I could use my work history with ES to buy a truck. From that point on, I was onboard”.

Paul’s Path to Ownership began in November of 2015 as a Contact Driver. In March of 2016, his track record with ES had proven that he was ready to become an owner. “Like a lot of people, I had to overcome financial difficulities from the past. But I knew that I had what it takes to be a success, all I needed was the opportunity. In five short months, me and my son Dalton Smith, who is also my driving partner, worked hard to produce the numbers necessary to take the step to ownership. This past March, I picked out a 2012 Cascadia from Expediter Truck Sales, sourced from their very own fleet and utilized Expediter Equipment Finance for the financing. We’ll be picking it up in a couple of weeks,” said Paul.

Terence was quick to point out that his Path to Ownership was more than just a means to an end. “When I made the decision to be a Contract Driver at ES, I saw an opportunity to be an entrepreneur and start a business that could some day help my son become an owner too. At the age of twenty-two, he has many years ahead to build a large fleet. As for me, I could see myself adding a few trucks of my own in the near future.”