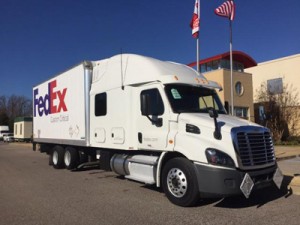 Seventeenth century English philosopher John Locke once said, “As people are walking all the time, in the same spot, a path appears.” If you translate this into modern Expediting terminology it would read: “As people are driving all the time, on the same road, a Path to Ownership appears.” And that’s where we begin this issue of Spotlight News, highlighting Ivan and Varina Rainbolt’s path to truck ownership, with help from Expediter Services.

The Rainbolt’s began their career in trucking in 2007 driving tractor trailers. But after a short time behind the wheel, they began to suspect that there might be a better way to make a living over-the-road. “After about a year of driving tractors, I had just about enough and was ready to try something new,” said Varina Rainboldt. “We talked to people who drove Expediting trucks and they told us about how much easier they were to drive and how the lifestyle was just so much better. We were lucky that when we made the move to Expediting, we found a good owner and stuck with him for a number of years.”

After a short time, their new owner made the move to FedEx as their carrier and the Rainbolt’s soon became White Glove TVAL drivers. Even though they were happy with their situation, the desire to someday own their own truck always filled their windshield. “Ivan and I have always wanted to own our own truck, but finding the right opportunity to make that move was challenging to say the least. We learned about Expediter Services while doing research online. Soon, we were in contact with Jeff Tacker and told him about our desire to be owners. He spent a lot of time with us discussing our options. We decided to become contract drivers at Expediter Services to learn more about the business before making the leap to ownership. That was in July of this year.”

As Ivan and Varina would soon find out, the transition to Expediter Services as contract drivers would accelerate their path to ownership. “When we moved to ES as contractors, it was like night and day. The support we got was tremendous and we learned so much more about the expediting business. Also, Jeff put us in touch with Patrick Lee and Eric Hyfield, (read their story) two owners who have utilized Expediter Services to build a successful fleet. We went to dinner with them and discussed how they built their business. This really motivated us and helped focus our efforts about being owners. We made the decision to purchase a truck, which is just what we did at the end of October.”

Now that the decision was made to become truck owners, Expediter Truck Sales and Expediter Equipment Finance kicked into high gear to find & finance the right truck. “Danny Vernon at ETS found us a great lightly used 2014 Cascadia WGTVAL truck with a 100-inch custom sleeper from Expediter Services’ fleet. We saved a bundle because it was used. The truck has all the service records and it’s still under the factory warranty, too. I think we got a really good deal. We utilized Expediter Equipment Finance for financing. It was a pleasant surprise when the transaction was done so quickly. The whole thing was just so easy,” said Varina.
With the holidays and the New Year approaching, the Rainbolts are looking to the future with much anticipation. “We’re looking forward to the earning potential of being truck owners. With the holiday crush coming up, it is going to be interesting to see the difference in our bottom line. And we’re looking forward to the New Year in our new truck. I can definitely see opportunities in the future for adding more trucks as we grow,” said Ivan.