With the right opportunity, transportation can be a great way to start and grow a business. Just ask husband and wife expediting team Edwin and Shannon Weisinger, who helped their sons Josh and Dustin join their family business. Together they are all signed on with Forward Air as their carrier, and together they took ES’s Path to Ownership (PTO) and got their MBA (Much Better Alternative) to truck finance, to move their businesses forward by purchasing a couple of Volvo trucks through Expediter Truck Sales. Read on to see how they made this family affair a Success in Trucking. 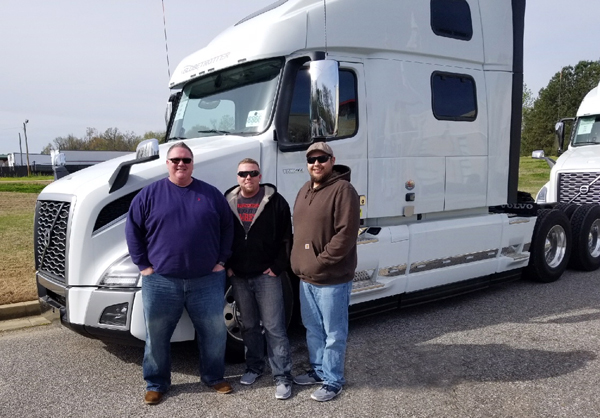 Edwin, how did you get started in Transportation?
Since I was twelve-years old, I used to sneak out with my mom & dad’s car. I fell in love with driving at a young age. I knew even then that I was destined for a career in transportation. After high school, I joined the US Air Force and retired after a twenty-year career. I began to think about what I wanted to do and naturally came back to my love of driving. I was so serious about a career in trucking that I waited until winter to go to truck driving school so I could be trained to drive on ice and snow. That was in 2014 and I’ve been driving ever since.

I drove for a couple of different companies after graduating from school. I was a successful driver, but there were issues and it just wasn’t a good fit. I knew there had to be something better on the horizon — and as it turned out, I was right!

Tell us how you found Forward Air and ES’s PTO and MBA?
Recently Shannon had retired from her trucking position at another company and began driving with me. She and I began talking about how we wanted a Volvo truck. I had trained on a Volvo, she had driven one in the past and we both love Volvo trucks. Since the company we were with at the time didn’t offer a Volvo, we decided that our next career move must include the opportunity of owning a Volvo truck.

We began talking to other companies that offered Volvos and heard about Forward Air. We spoke with them and they told us about ES and their Path to Ownership and Much Better Alternative to truck finance — and that we could buy any truck we wanted through their program as long as it met certain specifications. That sounded great and we contacted ES because we heard of no other opportunity like it in the industry. We spoke with David Withers (Director of Recruiting at ES) who explained the PTO and MBA program to us. We operated in the PTO program for several months and proved ourselves, proved the motor carrier and the equipment. During this transition time of proving everything, we worked daily with Bobby Gardner (ES Service Coordinator) to make sure we were on the right track. When ready, he put us in touch with Danny Vernon, Expediter Truck Sales Manager. Danny found us just the right Volvo — but there was a catch. Shannon and I have two sons (Dustin and Josh), who are also drivers signed on with Forward Air and they were also looking to purchase a Volvo. Danny sourced both Volvos and we knew it was a great fit. We have to give kudos to Forward Air for giving us the information we needed to choose ES as our source for owning a Volvo truck. They are a great carrier and we have been a success in trucking ever since signing on with them through ES.

Tell us about you Path to Ownership?

Once we chose a truck through Expediter Truck Sales, we submitted our paperwork to Expediter Equipment Finance. We soon got the call from ES telling us that we were approved. It was actually quite easy. ES took our work history, attitude and aptitude into account when it came to getting financed. We were thrilled that finally we had the Volvo truck(s) we had always wanted: two new 2018 Volvo 860’s. Our sons made the trip to ES’s headquarters in Southaven, Mississippi, to pick them up and the rest, as they say is history!

The trucks are fantastic! We get the best of all worlds — a great ride, great fuel economy and support from ES, so we Never Stand Alone.

What are your plans for the future?
With the numbers we’re running, we plan on paying off the truck early. Our sons are doing the same thing. Being true truck owners brings a whole new perspective to your business. Without a doubt, taking the Path to Ownership was a very good move for our family and we are making the most of this opportunity.

A Woman in Transportation’s Perspective

What’s your experience being a woman in transportation?
I’ve been a driver for twenty-two years, this December I will be starting on my twenty third year. I’m proud to say that during my career, I’ve run 4.5 million miles without an accident. When I first began in the business it was very difficult. There weren’t showers for women in the truck stops. In order to take a shower, you had to have the janitor stand in the doorway to keep all of the men out. Even then you only had about ten minutes to finish up before the guys started banging on the door to get you out of there. That’s just one example. But over the years there have been improvements for women (as well as men) like earning potential, better equipment, driver training and some regulations.

There was the problem of perception when it came to women in transportation. As you know, back then trucking was considered a man’s business and there was a great deal of prejudice towards women drivers. Over the years there has been a lot of good changes to make the industry more equitable and accessible for women. Companies are much more open minded today when it comes to women drivers and studies have shown that women are as good as anybody. So attitudes about women in the industry have slowly changed to allow more opportunity. That’s why I think ES’s 150 Women-Owned Business Challenge (Read more about the WIT/ES 150 women-owned business initiative here) is so important. It helps open the doors to more opportunity for women to own their own business and to be successful. Because of the progress women have made, trucking isn’t considered as much of a man’s business as it is thought of as just a business for anyone who wants to access opportunities.

As a team, how do you and Edwin balance your workload?

We run our truck as much as we absolutely are allowed. That means we sometimes shower every other day and at times, due to freight loads, we shower during our thirty minute breaks. Ed is the nighttime driver and I drive during the day. I deal with dispatch, all of our books and paperwork, shippers, consignees, etc. Because we’re signed on with Forward Air, most of our loads are drop and hook. Since I drive the day shift, I have his duties laid out ready to go when he takes over. Our family runs on a dedicated route and we make an effort to see our family as much as possible. We use technology (tablets, cell phones) to help communicate with each other. At the end of the day, we all work as a team and we’re all onboard when it comes to our business and our family.

What advice would you give to women who are looking at getting into transportation as a career?
I would tell women to never stop dreaming, and never stop doing what you want to do. Before you start doing the business, research it to find out about how it works. Learn as much as you can about the business. Find out about the truck and make the decision if you’re capable of handling it. And women should contact ES for more information and support.

I trained my kids to be truck drivers, and I trained my husband. If a woman has a husband or partner who is interested in the business, they should both look into it to see if its something they truly want to do together. Transportation can be a great career and a good way to earn a very good living if you’re dedicated and work hard.