In July, the Women In Trucking Association selected Donna as one of the honorees for the organization’s Top Women-Owned Business Award

For Donna Sleasman, the road she took in being recognized by the Women In Trucking Association as one of the industry’s top women business owners has been both rewarding and challenging. Earning acknowledgement as a trailblazing entrepreneur never entered Donna’s thoughts as she considered her career options in 1980 while working at a gas station in West Sacramento, California. 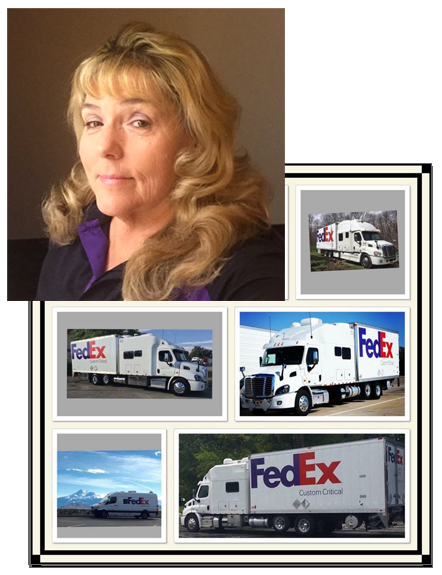 Today, Donna is the business owner of an expedited fleet that delivered $1.8 million in revenue in 2018. Donna’s company is on track to expand to 10 units before the end of 2019, and she is seeking to reach the goal of 20 trucks by the end of 2020. Part of Donna’s fleet growth has been achieved through the 150 Business Challenge, the collaborative initiative between ES and the Women In Trucking Association (WIT) to create 150 women-owned businesses in transportation. Donna’s relationship with ES dates back more than seven years when she began utilizing the discounts and support services available to the participants in the ES Community.

“ES has become a valued business partner, and they have helped me become more successful as a business owner. The discounts ES provides are some of the best in the trucking industry, and the support they offer to me and to everyone in their program is first-rate,” explained Donna. “I can walk right into (ES President) Jason Williams’ office and ask him a question. He will take the time to listen and to get me with the right people who can address what I need.

“ES backs up what they tell you and they truly care about your success as a business owner,” she added. “The biggest thing is that they have been there when I have needed them, and that’s the way they work with everyone in their program. If ES had been in business and with the program they have today back when I started, it would have been incredible. It’s been a long road to get to where I am today.”

The Long Road To Success In Trucking

Looking back to 1980 and her days in West Sacramento, Donna knew there was a better life available to her when she started to take a greater interest in the trucks that went past the filling station. As Donna did her research on entering the industry, she was also inspired by the memory of a family connection to trucking. During her childhood, Donna had to the opportunity to ride with her father back in the days when he drove a truck in the oil fields.

“I was always ‘Daddy’s Girl,’ and I loved spending time with him wherever he went,” said Donna, who would name the company she founded in 1983 Daddy’s Girl Trucking in honor of her father.

Donna understood that getting started in trucking as a woman in the early 1980s would not be easy, but she was determined to succeed by finding the right opportunity. Rather than enter a driving school and pay $3,000, Donna found an opportunity through the commercial transport division of North American Van Lines in which she could take the same $3,000 and put a down payment on a truck she would own.

At the time that Donna went through orientation with North American, she was the only woman in a class of 35 people. And while she met a few women professional drivers during the early days of her career (mostly wives who had gotten their CDLs to team with their husbands), Donna recalls only meeting one other woman who was running as a solo owner-operator at that time.

“The industry has changed so much since I started, and it has changed for the better,” Donna observed. “There just weren’t a lot of us out on the road back then. Now women have all kinds of opportunities.”

The expedited sector of trucking was barely in its infancy when Donna entered the industry. As she continued to work as an owner-operator in the world of big trucks, Donna kept her eye on what was happening within expedite. By 1999, the opportunities began to look more attractive on the expedited side of the fence, and Donna, having met so many husband-and-wife teams over her long-haul years on the road, had an idea that would eventually change the course of her career in trucking and her time as an entrepreneur.

Donna’s husband had been looking to possibly make a career change toward the end of the 1990s. Donna clearly understood the earning potential for an expedited team, and she shared a plan with her husband, who then obtained his Class B license. And while they achieved some early success when they started in expedite in 1999, Donna and her husband realized team trucking was not something that they wanted to pursue together long term. At the same time, the experience in expedite was a revelation for Donna, who began looking for the best solo opportunity within the sector that could fit her needs. FedEx opened a new door for Donna in 2000. Today, Donna and her fleet are part of the FedEx Custom Critical operation.

Enjoying a nearly 20-year association with FedEx, Donna’s approach to trucking is a stark contrast to the high turnover rates that are a part of the trucking industry’s landscape. Donna believes in the value of building relationships and finding a home.

“I have been able build a pretty good rapport with the people at FedEx over the years. I learned a long time ago in this industry it can cost you a lot of money to simply cut and run when something goes wrong,” said Donna. “If you leave some place because of an issue, you have to start somewhere else. You lose money in between carriers and you can lose money learning a new system. The learning curve can take up to three months, and that’s where people fall deeper into a (financial) hole. It’s much better if you can stick around and try to work things out when you have an issue.

“With FedEx, you have the brand recognition of the FedEx name. I have learned their system and I know what to expect,” added Donna. “They have kept my trucks running and their rates have always been pretty good.” 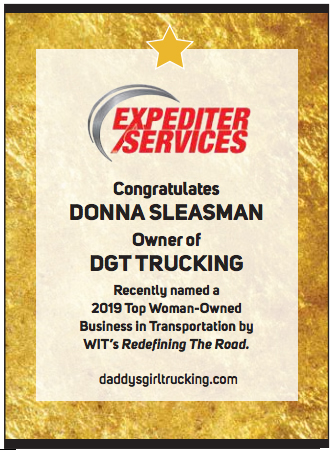 Donna was aware that ES had nominated her six-truck operation at the time for consideration by WIT for the association’s Top Women-Owned Business Award. ES had also submitted additional nominations for the WIT honor from the group of participants in the 150 Business Challenge program. While the other ES nominees had strong credentials in what amounted to the start-ups of their small businesses, Donna’s results with a year-over-year growth of more than 30 percent, the company’s 2018 revenue total and her experience of nearly 40 years in trucking presented a compelling case to the WIT panel choosing the honorees.

Though she remained hopeful that she might be recognized by WIT for the award, Donna admits that she was quite stunned when she learned that her Daddy’s Girl Trucking Company had been included among WIT’s list of Top Women-Owned Business Award winners for 2019.

“I was very shocked, I really was,” said Donna. “There are some really big companies out there that got recognized on this list. To think that someone like me who has a company with five or six trucks (at the time) could be on this list is quite flattering. It’s a tremendous honor, and I am very grateful to ES for the time and effort they took to nominate me for the award.”

“We were proud to nominate Donna for WIT’s Top Women-Owned Business Award, and we are thrilled that the association selected her company as one of this year’s honorees,” said ES President Jason Williams. “What Donna has accomplished during her career in the trucking industry is truly inspiring. To be an owner-operator and successful business owner in this industry for nearly 40 years makes Donna not only deserving of the award she received from WIT, but, in looking at her achievements, she should be considered as a real trailblazer.

“We are very grateful that Donna is part of the ES Community. She has been a mentor to a number of the owner-operators and independent contractors in our ownership programs,” Jason added. “Donna is someone you can look up to in this industry, and she is an example of what is possible with hard work and a determination to succeed.”

Long before the collaboration with WIT on the 150 Business Challenge, ES had established a reputation in the industry for opening doors for women who are seeking to become business owners in trucking. Today, the number of women within the ES Community who are fleet owners, owner-operators or independent contractors involved in the programs offered by the company now exceeds 38 percent of the ES fleet. When compared to the overall industry average of women behind the wheel, the percentage of women participating in the ES truck ownership programs and utilizing the company’s support services is nearly five times greater than the current national average.

Having worked with ES for the past seven years and having witnessed the change that has occurred in the industry over the past four decades, Donna has not been surprised to see an increasing number of women use the truck ownership programs from ES to launch their respective businesses.

“You can come across a lot of empty promises in this industry, but ES is the real deal. They stand behind everything that they tell you,” observed Donna. “ES has always been there for me. They are good, honest people who, if you can show that you have a good work ethic, will provide you with an opportunity to start your own business and they will support you in your efforts to be successful. I have been doing this for a long time, and I’m glad that ES is on my side.”

Staying Humble on the Road Ahead

While earning a well-deserved place on WIT’s Top-Women Owned Business List stands as one of the high points of her career in trucking, Donna is not allowing the recognition to take her focus away from the goals of running her fleet and growing her business. Amid all the congratulations she has received since the award was announced in late July, she has remained humble by never forgetting her roots and the route that brought her to this level of success.

“This is a great award and it still amazes me that I am a part of a list recognizing the top women-owned businesses in the trucking industry,” she explained. “I’ve had a lot of people ask me about it, and I try to stay humble. I don’t look at myself as a big-time business owner who is in an office. I still see myself as a truck driver, because I am a truck driver. If I need to get out there and take one of my trucks wherever it needs to go, I know that I can do that. I am willing to do the work that needs to be done for my business. But, no matter what I do or where I go, I’m still a truck driver.”